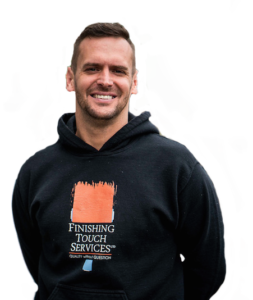 Finishing Touch Services Ltd (FTS) is the Property refurbishment company that Rob and Lydia run. Rob took 2 years out of ministry to establish the business, whilst also seeking God for a much deeper prayer life and character. From the very beginning, the business was always meant to be a means to fund the kingdom side of Rob and Lydia’s ministry.

After starting as a sole trader, Rob took on an apprentice, who joined Rob in working very long hours for a few long weeks. Their hard work eventually paid off as they won some bigger and better jobs as FTS built up a reputation for providing high quality workmanship and received highly positive feedback on MyBuilder.com.

Now, Finishing Touch Services Ltd has 15 men who work for the company and were recently able to promote a very experienced decorator called Alan Jones to Site Manager. Alan takes a great deal of the load from Rob so he can give more time and energy to the Kingdom Cause Community vision. FTS donates a large portion of its profits to KCC and funds much of the work we are now doing as a team.

Finishing Touch Services Ltd recently launched a new initiative called “Connect 10”, which is a network of local businesses who donate 10% of any sales that come from recommendations from FTS to Kingdom Cause Community.

In addition to providing regular networking events, such as networking brunches, we are also looking into developing a newsletter featuring articles on what KCC is up to and promoting the businesses that have partnered with us. We love seeing what others are up to that is making a difference to people up and down the country.

We are always on the look out for new businesses who want to join us so if you want more information, please email our Business Development Manager – Michael Odendaal, who will happily answer any questions you may have!

I have used others to carry out work for me but it was my lucky day when I used Rob and his team to decorate my lounge. From the start Kim fixed new coving and prepared the way for Malcolm to apply 3 coats of plaster to a large ceiling and Chris to paint the ceiling walls, woodwork and radiators. I have nothing but praise for the care and attention shown by each and the professional way they carried out their tasks to produce a superb result. Rob was constantly in touch and gave his full attenti…

Rob provided a good quote for a small painting and wallpapering job within a few hours of listing. He was able to fit the work in for us between Christmas and New Year which was ideal and communication throughout the proposal process was excellent – including detailed invoicing and guidance on materials to get etc. Chris, who was doing the job for us, completed the work to a very high standard, kept everything neat and tidy in the house and was prompt with his arrival times each day. When we ask…

We were really pleased with the service that we received from finishing touch services. Rob was really friendly and he quoted fairly for the job, making sure we got what we wanted. Mick painted our stairs and landing and he did a great job. He worked hard and quickly and was really pleasant to have around. I wouldn’t hesitate to book them again or to recommend them to others!

We as a company had a very pleasant experience with Finishing Touch Services.They completed work for one of our customers, they we were very happy with the finished result as were we.

Very pleased with the work carried out by Rob and his team, who were friendly and professional. Rob was communicative throughout and transparent since the beginning. We also appreciated that he gave us time to review the decorating after completion and for one of his team to come back and fix/touch up identified snags. With the high standard of work, we are already planning to use Finishing Touch Services for future decorating and other general handyman jobs.

Hired Rob and his team following a water leak and ceiling damage but we significantly extended the project to include replacement of the shower, redecorate two rooms and replaster two ceilings. Rob managed things around our holiday, used a number of different people with specific expertise and brought it in on time and on budget. The quality of work was first class, all the team were very capable and friendly and we are very happy with the overall job.

Fantastic experience. Rob went above and beyond to make me feel comfortable, gave a quote via pictures and worked around my schedule to get the job done quickly. Had the 3 rooms painted and 2 walls papered, All finished within 2 days. Rob was on hand for any questions I had and Chris and Tom were extremely professional and hard working while here and tidied up after themselves before leaving. I was very anxious about having strangers in my flat but all the guys all put me at ease and were so lo…